Israel, like many long thin countries, has a surprising number of microclimates. It is possible to ski in the morning on Mount Hermon in the north, and in the afternoon to go scuba diving to see the Coral Reef in the Red Sea resort of Eilat. Likewise it is possible to be in the central mountains at 1,000 meters altitude, and a short time afterward to fall away to the Judean Desert, where the Dead Sea, the lowest point on earth at 400 meters below sea level, is situated.  One can visit the hot, humid Sea of Galilee, where you will be surrounded by date palms and banana trees. Climb ten minutes on to the Golan Heights and cool climate produce like apples, pears and wine grapes are grown. It is a country of variety, extremes, but all on a small scale. Israel would comfortably fit into Wales or New Jersey

The official Israeli wine regions were decided in the 1960’s long before the Israel wine industry took its current shape. The country is divided into five regions; Galilee, Shomron, Samson, Judean Hills and the Negev. There are ongoing talks to change and update these to fit in with the realities of today, but until the decisions are made, these remain the regions registered by the TTB in America and the European Community. The Shomron and Samson areas are the traditional wine regions of Israel. These are coastal regions where the bulk of vineyards were originally planted and they formed the basis of Israeli wine for a hundred years or so. With the quality revolution, new vineyards were planted in the cooler areas of the Golan Heights, Upper Galilee, Judean Foothills and Judean Hills. These are proving to be Israel’s best quality wine producing areas, where most of the new vineyards are being planted.

Galilee – The Galilee, Galil in Hebrew, is the best appellation, situated in the north of Israel. This comprises Israel’s two finest quality wine growing regions, the Upper Galilee and the Golan Heights. These are high altitude, cooler climate vineyards planted comparatively recently. The Golan Heights is really a different geographical region to the Galilee – but in wine law, it is registered as a sub region of the Galilee.

The Upper Galilee is a mountainous area of forests, plunging peaks and stony ridges. It is Israel’s most beautiful vineyard region. The soils are heavy, but well drained. They tend to be a mixture of volcanic, gravel and terra rossa soils. The Kedesh Valley, Naftali and Dishon vineyard areas are 350 to 450 meters above sea level. They are close to the northern border with Lebanon, not so far from the Bekaa Valley, the heart of the Lebanese wine industry. The vineyards of Kayoumi, Kadita, Ramat Dalton and Ben Zimra, nearer Mount Meron, range from 650 to 1,000 meters above sea level. Most of the vineyards in the Upper Galilee were planted only since the mid to late 1990’s. The annual precipitation in the Upper Galilee (and Golan) is from 800-1,000 mm. Winter temperatures can be from 0-15 0C whilst in the summer the range is from 12-30 0C.

The main wineries in the Upper Galilee are Galil Mountain, Dalton and Adir, and Carmel’s Kayoumi Winery.

The area of vineyards in the Lower Galilee is situated at Kfar Tabor, near Mount Tabor.  Here elevations are 200 to 400 meters. Soils vary between volcanic and limestone. Precipitation ranges from 400 – 500 mm a year. Tabor Winery is the main winery of this area.  However, only just over 10% of the Galilee’s vineyards lie in the Lower Galilee.

The Golan Heights is a volcanic plateau rising to 1,200 meters above sea level. The area benefits from cool breezes from the snow covered Mount Hermon. The area may be divided into three: The southern Golan overlooking the Sea of Galilee is 350 meters above sea level. The soils are basaltic clay. The middle Golan is 400 – 500 meters altitude. Then there is the Upper Golan which rises from 750 to 1,200 meters. Soil is more volcanic tuff and basalt. The Golan was first planted with in 1976, but in the 1990’s became a major wine growing region in volume not just quality.

The main winery situated on the Golan is the Golan Heights Winery, situated at Katzrin. Other prominent local wineries are Chateau Golan, Pelter, Bazelet Hagolan and Odem Mountain.

Shomron – Shomron is Israel’s most traditional wine growing region first planted by Baron Edmond de Rothschild in the 1880’s. Mount Carmel, Ramat Manashe and the Shomron Hills are part of the Shomron Region.The main concentration of vineyards is in the valleys surrounding the winery towns of Zichron Ya’acov and Binyamina, benefiting from the southern Carmel Mountain range and cooling breezes off the Mediterranean Sea. Elevations rise from 0 to 150 meters above sea level. Soils vary from calcareous clay, terra rossa, limestome and chalk. The climate is typically Mediterranean. Annual precipitation is 400 – 600 mm.

There are also new vineyards being planted in the central mountain region of the Shomron, known as the Shomron Hills. Here the shallow soils on a limestone base and the high altitude, between 700 to 850 meters, prove ideal for growing wine grapes. The sparse stony hills look very Biblical.

These mainly supply the small wineries nearby like Gvaot, Shilo and Tura.

Samson – Samson is not a geographical place, but the wine region is named after the Biblical figure, that frequented the area.

The central coastal Judean Plain and Judean Lowlands, south east of Tel Aviv, is a large part of the Samson Region, where vineyards were planted in Rothschild’s time. The area is from 0 to 100 meters above sea level and it is a hot, humid region. Summer temperatures range from 20 to 32 0C. Annual precipitation is 350-400mm. Alluvial soils mix with sandy, clay loams. There is also a fair bit of terra rossa. Many of the vineyards for large volume wines come from here.

Wineries in this region include the historic  Rishon Le Zion Wine Cellars, Barkan Winery at Hulda, Bravdo at Karmei Yosef and the Latroun Monastery.

The second part of the region is the Judean Foothills, which is the fastest growing region in terms of newly planted vineyards and new start-up wineries. These are the rolling hills with limestone soils and clay loams, which may be experienced on the drive to Jerusalem. Elevations are higher, from 50 to 200 meters above sea level and average rainfall is up to 500 mm a year. Winter temperatures are from 5 to 20 0C, whilst those in the summer range from say 18 to 30 0C.

Judean Hills – The Judean Hills is a quality but underdeveloped wine region ranging from the mountains north of Jerusalem, through Gush Etzion to Yatir Forest, south of Hebron. Warm days and cool nighttime temperature characterize the region which in places is 500 to 1,000 meters above sea level. The soils are thin, limestone and stony. The higher mountains receive snow in the winter. Annual precipitation is 500 mm. Average winter temperatures are 0-18 0C, whilst summer temperatures can rise from 15 to 30 0C.

Negev – The Negev is the desert region that makes up half the country. Vineyards have been planted in the higher areas in the northeast at Ramat Arad, a semi arid area, which is 500 meters above sea level, with annual precipitation of 150 mm. a year. Here the soils are loess.

Yatir Winery and Midbar Winery are situated in the north east Negev.

Also in the central Negev Highlands, in particular Sde Boker and Mitzpe Ramon, where soils are sandy loam. The Negev Highlands range from 700 to 1,000 meters elevation.  Rainfall is 50 to 100 mm. a year. Temperatures range from very hot during the day (15-40 0C in the summer) to cooler evenings and cold nights. The vineyards are sometimes shrouded in mists during the morning hours. The dryness and lack of humidity keep diseases to a minimum.

Kadesh Barnea and Carmei Avdat are two of the wineries from the Negev. 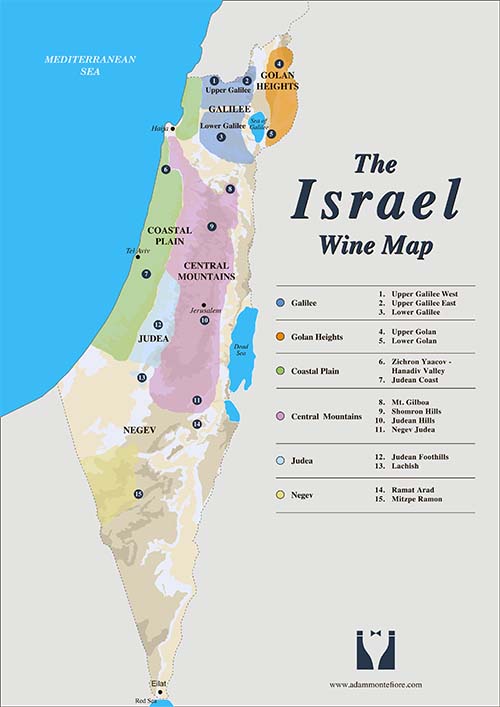