It is hard to believe that Carmi Lebenstein is no longer with us. She was so vibrant and lively, but tragically as a result of a freak accident at home, she was taken from us well before her time. 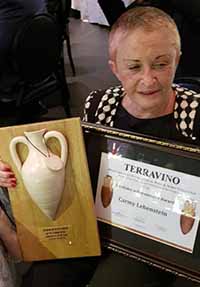 Carmi was virtually born in a bottle to a family of distributors and retailers of wine and spirits. Even her name is revealing (meaning ‘my vineyard’). She herself was a retailer, sales manager, marketing director and wine consultant and was enormously successful in every role.

She was very much associated with the Carmel Mizrachi of the 1990’s, when they were by far the most dominant winery in Israel. She was a tiny figure, but a giant in presence and impact. She was smart, sassy, intelligent, and no-one could pull wool over her eyes. She could be funny, had a piercing wit and was a master of the sharp put down. Professionally she was creative, innovative and many of her ideas were ahead of the market.

As a woman, she was the first to break the glass ceiling in the Israeli wine trade, in what was then a very men dominated industry.

When I made Aliyah I worked at Carmel for two years from 1990-1992. Carmi was then the sales manager and I was the wine education manager for hotels & restaurants.  In those days she was one of the very few people who really understood the wine trade. In my early days as a new immigrant, oleh hadash, she offered me baskets of advice and had the patience to assist me writing my letters in Hebrew.

I last spoke to her a few weeks ago , because I needed photos. I am writing about woman and wine in Israel for the Jerusalem Post and of course she will feature very prominently in the article. I asked for two photos, but she sent me an album of photos ranging from her wedding photo, photos of her in her halcyon days at Carmel with chefs Eyal Shani, Haim Cohen etc, of her skiing and of her receiving the Terravino Lifetime Award.

Carmi, thank you for the memories. You will be sorely missed. Sincere condolences to your family. The Israeli wine trade is today a poorer place. May your memory be a blessing.

One Response to CARMI LEBENSTEIN Z”L