Recanati Winery has laid the foundation stone for a new winery. more »

They have talked about it for years. Then, after making the decision, it took five years to receive the approvals. Now, finally, the foundation stone of the Recanati Winery has been laid by Leni Recanati and Uri Shaked, partners in the ownership of the winery. The new winery will be built in the Upper Galilee, at the Dalton Industrial Estate and the aim is that it will be open in January 2022, in good time for the 2022 harvest. They will be neighbors to Dalton Winery, amongst others.

The new winery will be producing 2 million bottles, almost doubling the current production. The winery will be at a cost of NIS 50 million. It will have an active visitors center, with a view of Mount Hermon.

Recanati Winery was founded in 2000 by Leni Recanati. The current CEO is the low key, quiet Yaniv Inbar. The Deputy CEO is winemaker Gil Shatzberg, who was previously at Carmel’s Zichron Yaacov Cellars and Amphorae Winery. Since 2017, the chief winemaker is Koby Arbiv (also owner of the garagiste Mia Luce).

The winery’s entry level wines are under the Yasmin label. Then there is Jonathan, Upper Galilee, Med Blend, Reserve up to the flagship label, Special Reserve. They also produce the local varieties Marawi and Bittuni. The wines are distributed in Israel by the Shaked family, (part owners) one of the leading wine importers & distributors in Israel, and owners of the wine store chain, Derech Ha’yayin.

For many years the existing winery has been overcrowded. It has outgrown its premises in Emek Hefer. Most of their vineyards are in the Upper Galilee, and the new winery will conveniently be close by. If their plans come to fruition, they will become the largest winery in the Upper Galilee. 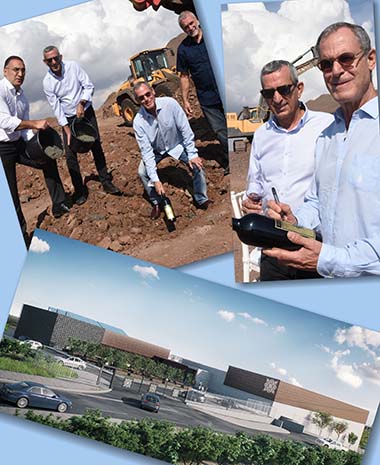