A new film has been made about Israeli wine. It is called ‘Holy Wine.’ When I usually hear that term, I immediately think of Kosher and Sacramental wine for Jews and Christians. In this film the word ‘Holy’ is used ironically or even cynically. Despite realizing this, it did not prepare me for what was coming.

The film highlights the current disunity of the Jewish people in their homeland. We basically have three peoples in one country. There is the land of Tel Aviv, the land of wider Israel and the land of Judea and Samaria. Each election, and we have had a few recently, reminds us of the fractures in the Jewish people’s solidarity, even within our tiny sliver of a country, which would comfortably fit into New Jersey or Wales.

Greater Tel Aviv, representing secular, art loving, hedonistic Israel, is the wine capital of the country. This is where most of the wine is purchased, consumed, tasted, shared and discussed. You may think this film is just about wine. It is true that it is filled with views of vineyards, words of winemakers and wine personalities. However it is not just about wine. It is also about religious coercion, religious power and an unchallenged religious hegemony. The wine is the vehicle to present a certain view, with regard to Kosher wine production, that is not seen as logical or fair by the secular voices in the film. We hear the opinion of the country of Tel Aviv, figuratively speaking of course, loudly proclaiming their angry views about Kosher wine laws and restrictions.

The first part of the film is purely about Israeli wine and is a first class documentary explaining and illustrating the Israeli wine narrative.  It is beautiful, entertaining, informative and absorbing. We learn about the history, see some beautiful views, meet some of the best winemakers and hear some good quotes. The film mainly covers the wineries that were instrumental in the boutique winery revolution in Israel: Castel, Margalit and Tzora wineries are the star features. There are some wonderful sections of film taken from the early days of these wineries, where you see the young Eli Ben Zaken, Yair Margalit and Ronnie James together. What precious, previously unseen, film material that is. There also some touching shots of father and son, Yair Margalit and Asaf Margalit, pruning in the vineyard together.

No doubt the film has a great wine beginning. Many of the important statements describing Israeli wine are in there and there is a basket full of information. Suddenly, after about 50 minutes, the film takes a sharp left turn, with no warning, and enters the world of Kashrut and wine. Here a diatribe begins. It is self-flagellation. The point is made and remade, and then, just in case we did not understand, it is made again. It is not a subtle undertone. It is like being slapped in the face with a wet carp again and again. The winemakers and Tel Aviv wine intelligentsia rage against the kosher restrictions. This takes over the film. 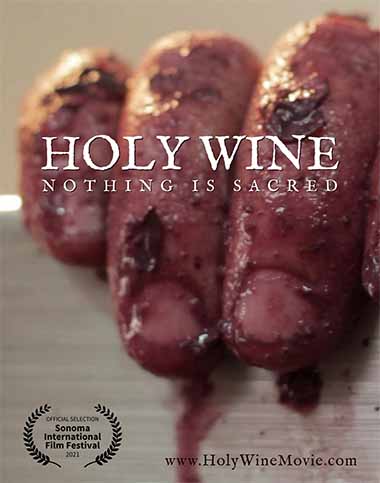 I have interviewed the Director, Snow R. Shai, and apparently this was his objective. He wanted to take the controversial issue of Kosher wine, a subject that no-one talks about, and bring it to the forefront. So he slices it open on the cutting board, worms and all, to provoke, educate and promote consideration and discussion. He also explains what the word Kosher entails for wine. I have interviewed him for my column ‘Wine Talk’ in the Jerusalem Post and we will discuss this more there.

Holy Wine is not a balanced view. It does not put the facts on the table to let the viewer decide. The film does not investigate the spiritual aspect for making Kosher wine, nor does it dwell on the commercial necessity. It is a film with an agenda, a point of view and a message; a film with an attitude.

There is a paradox here. In our dreams we aspire to be the ‘new’ New Zealand. We want the awakening that Greek wines are experiencing for ourselves, and to be the latest ‘new find’, like Georgian wines. The reality though, is that the Kosher market is the life blood for Israeli wine. Only a few wineries are Kosher from belief, most are Kosher from choice and this is usually for economic reasons. Each and every wine producing Kosher wine, has freely decided to go Kosher and to pay the price (emotionally, physically and financially), in order to enjoy the benefits of that ‘oh so important’ stamp on the back of the label.

I have spent a lifetime touting ‘Israeli, Eastern Mediterranean wine’, instead of ‘Middle Eastern, Jewish, Kosher wine’. I have been a pioneer in marketing Israel as part of the Eastern Mediterranean, because Kosher is not a country and Israel is not an island. I do not mention the K word through choice, even though in the past, I always worked for Kosher wineries. Only if asked about it, I would say “the wine is Kosher if you want it to be”, because if the wine is Kosher or not Kosher, is simply not relevant. The only person for whom this is important is the end customer. For the grower, winery and winemaker, the objective is to make quality wine. The film does make the case for taking Israel off the Kosher shelves and putting it in the main section. By my reckoning, this should be with Greece and Lebanon and the other East Med wine countries.

So this is a film made in the country of Tel Aviv, primarily for the country of Tel Aviv, though it will of course be of interest to many abroad too. It is a comment against the situation of religious coercion in Israel told through the mouths of sympathetic or frustrated winemakers and the Tel Aviv wine intelligentsia. For such a miniscule wine country, we do seem to have an inordinate number of opinionated armchair experts. The film certainly gives them the opportunity to vent and share their pearls of wisdom.

The film is in English so it truly opens a can of worms. The question is whether it advances Israeli wine, or in the interest of art, saddles Israeli wine with the mark of Cain, or rather the mark of K, like never before. I think some of the Kosher wineries that participated, may feel uneasy at the result, questioning the wisdom of cutting off the branch upon which they sit. On the other hand, the non-kosher wineries will feel vindicated. At last they have had an opportunity to have their say.

However the film is well made, with some great filming, many noteworthy quotes, good background effects and stirring matching music. Snow R. Shai is certainly a very talented Director and filmmaker. Holy Wine was not made with sponsorship by the wineries. As such Snow was totally unrestricted and free to do what he wanted. I absolutely defend his right to make the film with his own message. He is an artist giving a personal expression. If it was made with the intention to provoke debate, he has succeeded. When the film ended, I just sat there for a few minutes in silence, trying to absorb what I had just seen.

Incidentally there is also a new film about Lebanese wine called Wine and War. I reviewed it for the Jerusalem Post. I heard some critical views expressed in Lebanon, of why did they have to always portray Lebanese wine through a lens of war. Some may say the same of the Israeli film and Kashrut, but the defense would be that Israeli wine and Kosher wine are unavoidably connected or entangled from the womb.

To be Kosher, or not to be Kosher! That is the question! Those that bristle at Kosher and against religion will love it. Those who are religious will be surprised to learn how bitter the other side is. As for those who are just interested in Israeli wine……..there is enough quality in the film to learn a great deal. Uncontroversial though, it is not!

The film ‘HOLY WINE’  is being launched at the Sonoma International Film Festival on March 25th 2021.
For more details: http://sonomafilfest.org/festival