Tempo Beverages is a total beverage super power in Israel. They are Israel’s largest brewery, owners of the Goldstar brand, and also own Israel’s largest winery, Barkan-Segal. They import, distribute and market global brands such as Heineken beer , Chivas Regal & Absolut spirits, Pepsi Cola soft drinks and Perrier water, amongst many other big names. They are also present in Cyprus, a beautiful country which is undergoing a quality wine revolution, similar to that which has taken place in Israel. There is nothing more beautiful than the vineyards in the high altitude slopes of the Troodos Mountains. Israel is unable to match the beauty and elevation of the Cypriot vineyards, the age and number of ‘old vine’ vineyards they have, nor the numerous existing and newly discovered indigenous varieties.

The largest winery in Cyprus is SODAP, otherwise known as the Kamanterena Winery. SODAP is one of the large traditional wine cooperatives in Cyprus, which has dominated Cypriot wine along with KEO. It was founded in 1947. In 2004 it moved from its large old winery in Limassol and moved to Stroumbi, a wine village in the Paphos district of western Cyprus. The new facility is called Kamanterena Winery and their winemaker is Loucas Papaloucas

Tempo have provided the services of winemaker Ido Lewinsohn MW, to make a joint venture wine, which has recently been launched in Cyprus. Ido Lewinsohn is Head Winemaker of Barkan-Segal, a 15 million bottle winery. He was in 2020 crowned as Israel’s second Master of Wine. He is known as an innovative winemaker, a specialist in Mediterranean varieties and in Israel’s newly developed ancient, local varieties. He was previously winemaker at Recanati Winery. 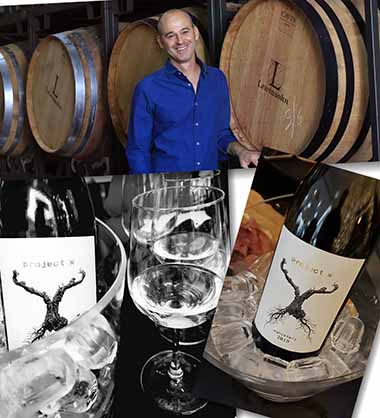 The wine is called ‘project x’ and is a result of Lewinsohn working with Papaloucas, with a Cypriot grape variety grown in a Cypriot vineyard. The wine is a white varietal made from the Xynisteri variety. This is the main white wine variety in Cyprus, and arguably the producer of Cyprus most well known wines (outside Commandaria, of course.) The grapes were grown in the Eagle Rock vineyard, on limestone soils, overlooking the Mediterranean sea, not far from Paphos. They were harvested in small bins at night, and gently pressed in the early morning. The fermentation at low temperatures started in stainless steel tanks and finished in 500 liter Burgundian oak barrels. The wine underwent frequent battonage and did not undergo malolactic fermentation. The production of this first joint venture wine was 3,000 bottles. Project x 2019 is a light gold color, with aromas of citrus, stone fruits and floral notes. It has an intense flavor with fresh acidity.

It is to be hoped that cooperation between Cyprus & Israel, Kamanterena Winery & Tempo, and Loucas Papaloucas and Ido Lewinsohn MW will continue. Looking forward to the next wines….