Tsippora Mendelsohn, née Shor, has passed away aged 93 years old. Her long life, connection with a famous wine family, and two wineries in particular, makes it particularly worthwhile to remember her. She was a figure whose life spanned an important part of our wine history. She was born into a period when the grapes were brought from Hebron on donkeys and died after seeing her ex winery score 96 points in the most important competition in the world. This gives an opportunity to connect the dots between then and now.

She was from the Shor family that founded their family winery in the Muslim quarter of the Old City of Jerusalem in 1848. It was alongside ‘Ha’Kotel Hakatan’ – the Little Western Wall. Apart from the Shor Winery, the family was involved in other wine initiatives too. One family member was part of the partnership in founding the Carmel Oriental branch in Cairo, Egypt and another was involved with founding of the winery at the Mikveh Israel Agricultural School.

Tsippora was born in 1929, the year of the riots in Jerusalem and Hebron. The Shor family were part of the Karlin Hassidic dynasty.  At the time, Tsippora’s legendary grandmother, Rosa, was managing the winery after the early death of her grandfather, Shmuel. Rosa had opened the first wine bar and store (in the cotton market of the Muslim Quarter.) She was the first woman to manage a winery and steered the winery in the move from the Old City to Beit Israel.

By the 1940’s, the next generation had taken over. Tsippora’s father, Moshe Shalom Shor, was managing the winery along with his brother, Avraham Meir. As a result the winery became known as Shor Bros. In 1944, they changed the name of the winery to Zion Winery, as family names used in business were disapproved of and discouraged by the authorities. Then as the family grew, the brothers decided to split into two businesses. Avraham Meir continued to produce wine at Zion Winery and Moshe Shalom founded Shimshon Winery which agreed to produce only spirits and grape juice. It was totally amicable. Zion and Shimshon Winery both continued to operate from the same building in Beit Israel, with a partition dividing the two companies. However it was so intimate, that when Shimshon Winery produced Arak, old timers remember the all-pervasive smell once seeping into the wine at Zion Winery.

Tsippora Shor married Yona Zeev Mendelsohn, a Chabad Hassid. In 1951 they inherited and took over the ownership of Shimshon Winery, which was passed down by Moshe Shalom Shor. They returned to making wine, but production was mainly liquid religion, Kiddush wine and grape juice. Soon after, Tsippora’s brothers also decided to follow the previous generations of their family, by staying in the wine business. After following a few models, including a joint venture with Efrat Winery, Yitzhak Shor founded Arza Winery and Yechiel Shor, founded Hacormim.

In 1976, Shimshon Winery moved to Atarot, in the northern outskirts of Jerusalem. Zion Winery,  Arza and Hacormim moved to the same street in Mishor Adumim, east of Jerusalem, in the Judean Desert. These four wineries were collectively known in the trade as ‘the Jerusalem wineries.’

Yona Mendelsohn passed away at the age of 66. Then, Tsippora and Yona’s son Shlomo Zalman Mendelsohn took over the management of the winery. However in tragic circumstances, he passed away soon after, well before his time. The winery was sold to businessman Ofer Guetta in 2006. The winery’s name was changed to Jerusalem  and these days it is known as the ‘Jerusalem Vineyard Winery.’

In 2019, Jerusalem Vineyard Winery opened an innovative Visitors’ Center in an historic setting.  It is situated at the Montefiore Windmill in the Mishkenot Sha’ananin – Yemin Moshe neighborhood of Jerusalem, overlooking the Old City Walls. 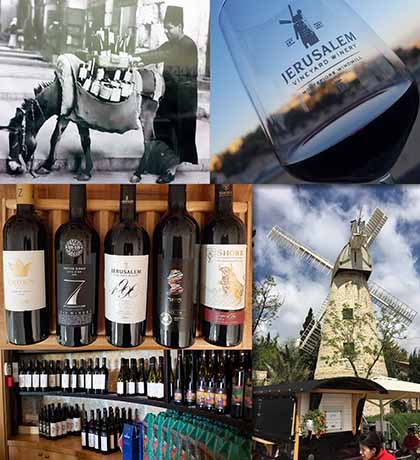 Today Lior Lacser, ex Head Winemaker of Carmel, is CEO and winemaker. The winery produces roughly 3 million bottles a year, about half of which is grape juice. The quality continues to improve and there has been some good international recognition. Their Jerusalem Premium 3400 Shiraz 2013 scored 93 points in the Wine Enthusiast. Last year, the Jerusalem 4990 Single Vineyard Petit Verdot 2018 did even better. It scored 96 points in the Decanter World Wine Awards and was awarded a gold medal.

Today Tsippora’s wider family continues to make wine, 174 years after they began. There are the three traditional wineries, Zion, Arza and Hacormim, along with their new satellite wineries: 1848 Winery, Hayotzer Winery and Shorr (sic) Estate. In a sense there are now six family wineries, whilst when Tsippora was a child, there was only one.  She will have noted that 1848 Winery, Hayotzer Winery, Jerusalem Vineyard Winery and Zion Winery have each gone through a quality revolution in the last ten years. Internationally trained winemakers, new equipment and new vineyards have helped these wineries in particular to receive local and international quality recognition. Futhermore, Arza, Zion and Jerusalem are now each amongst the largest ten wineries in Israel.

During Tsippora Mendelsohn’s lifetime, Israel changed no end, and so did its wine industry. It is true the wineries she was associated with, changed more in the last ten years than the previous 170. However it would have given her immense pleasure to see that the Shor family is still making wine, and she would have been particularly proud to see the giant strides made by Jerusalem Vineyard Winery in recent years. May her memory be a blessing.