Founded by David Ginio in the Old City of Jerusalem. more »

Recently, Adv. Gabriel Ginio passed away in Jerusalem at the grand old age of 97. He was the 6th generation of the Ginio family. This was the same family, which founded the first recorded winery, in the Old City of Jerusalem in 1840. Gabriel Ginio may have been a lawyer not a winemaker, but to those that met him, he was able to reminisce about the family wine business. May his memory be a blessing.

Only last week another nonagenarian passed away. This was Tsippora Mendelsohn, née Shor. She was a matriarch of the Shor winemaking dynasty and she later owned Shimshon Winery with her husband, Yona Mendelsohn. Different branches of the Shor family today own and manage 1848 Winery, Arza Winery, Hacormim Winery, Hayotzer Winery, Shorr (sic) Estate and Zion Winery. That is quite something. They are still in the wine trade after 174 years and still counting. The Shimshon Winery was also founded by the Shor family and later owned by the Mendelsohns, who sold it in 2006. It is now known as the Jerusalem Vineyard Winery.

The Ginio and Teperberg Wineries were situated in the Jewish Quarter of the Old City of Jerusalem, whilst the Shor Winery was in the Muslim Quarter of the Old City. The Ginios were a Sephardi family, descended from Jews expelled from Spain. From there they settled in Salonica (Thessaloniki in Greece) and came to Jerusalem at the beginning of the 19th century.  The Shors and Teperbergs were both Ashkenazi families from the Ukraine, though the Teperbergs arrived via Austria. Hence the Germanic sounding name.

The first Jewish vineyard was only planted by the British Consul James Finn at Kerem Avraham in 1855. However Jewish vine growing would not begin in earnest until the First Aliyah. Three experimental vineyards were planted at Rishon Le Zion and Zichron Ya’acov in 1882, but planting vineyards only took off from 1884, when the efforts were sponsored by Baron Edmond de Rothschild. So the Ginio and Shor Wineries sourced grapes from Arab owned vineyards in the Hebron region. The Shor family had a long term business arrangement with the same grower over decades. Some other took table grapes from the market in the Old City. As most of the wine was sweet or sweetened, they would not have been judged by the same quality parameters as today.

Ginio Winery was situated at the beginning of Yehudim Street in the Old City. There is a plaque outside commemorating the Ginio Winery. The family lived in the house and the basement was the winery. Today it is a second hand bookshop. There was trap door through which the grapes were lowered to the winery. This was a similar set up to the Shor family, who also lived above the winery.

However, the most famous product of the Ginio Winery was Arak. This is the Levant anise flavored spirit, similar to Turkish Raki, Lebanese Arak and Greek & Cypriot Ouzo. Perhaps that explains why the plaque does not feature a wine label, but an arak label! Apparently the Ginio Arak was very popular in the coffee bars of the Old City…even in Muslim areas! The Ginio emblem was a deer along with the word Ginio and Jerusalem in Hebrew. Today this has been carried on by the Elite and Alouf Arak, produced by the Joseph Gold Sons, who have been distilling since 1824. Their Araks have two deers on their labels.

The Ginio family were also in the wine trade owning a few wine shops, initially inside the Old City, but later in western Jerusalem too. The most well-known wine shop and liquor store was in the plaza, just inside the Jaffa Gate, below the Amdosky Central Hotel. The deer logo was visible, inlaid into the paving, until it was criminally destroyed by careless renovations in the early 1990’s. The Ginio family sold wines, spirits, liqueurs and imported beer in their shops…and not only their own products. For instance the Shor wines were initially sold there. Of course, the legendary Rosa Shor also opened her famous shop cum wine bar in the cotton market of the Muslim Quarter.

The Ginio family operated in the wine trade until the fall of the Jewish Quarter in 1948. Now all that remains are these plaques described here, folklore and memories of those old enough to remember. Many assume that the Ottoman Empire did not permit wine production because of the Muslim prohibition against alcohol. However, the Ginio, Shor and Teperberg Wineries show wine was produced. Their business was small, boutique, even domestic in our terms, based on family and community first and foremost. Yet these three names are proof there was wine in the Holy Land before Carmel was established. 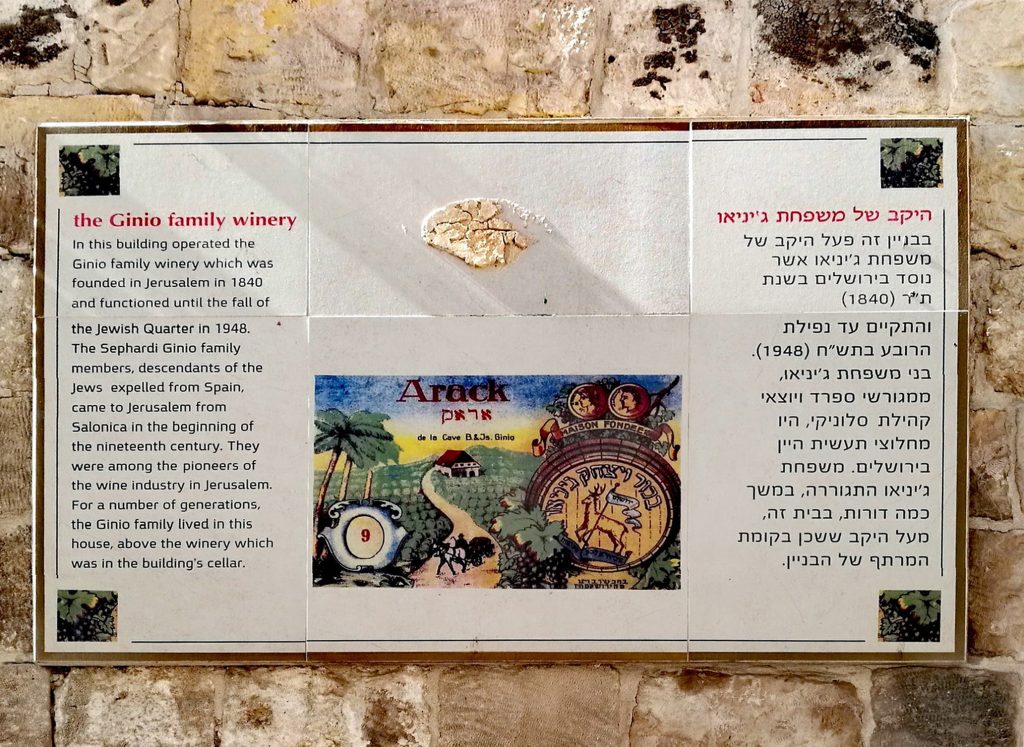