CARMEL TO MERGE WITH JAFORA

Carmel Winery, the historic winery of Israel, is going to merge with Clal Beverages, which owns 30% of Jafora Tabori, Israel’s second largest soft drinks company. The value merged company is set at NIS 840 million. The new company will become a public company and trade on the stock exchange.

Carmel was founded in Rishon Le Zion by Baron Edmond de Rothschild, owner of Chateau Lafite in Bordeaux, in 1882. It has made wine over three centuries: the 19th, 20th and 21st, under the auspices of the Ottoman Empire, the British Mandate and the State of Israel. Carmel was by far the largest winery in Israel for over 120 years and a near monopoly for most of that time.

Jafora markets brands such as Schweppes, Spring, Tapuzina, RC Cola and Mey Eden. It is far older than both its main soft drink rivals today, Coca Cola Israel and Tempo Soft Drinks. Jafora was founded in 1933 in Rehovot and Tabori was founded in 1936 in Pardess Hana. In 1990 the two companies merged to form Jafora Tabori.

The new company will be known as Carmel Winery. The CEO will be Nadav Arens Arad, ex Strauss Coffee, who is from a family of wine growers. He has been CEO of Carmel since 2018. The chairman will be Gilad Halevi, partner & founder of the Kedma Foundation. The move will safeguard the future of Carmel and ensure the creation of a total beverage company to compete with the giants. These are the Central Bottling Company based in Bnei Brak (producers/ importers/ marketers of brands such as Coca Cola, Johnnie Walker, Carlsberg , Moet et Chandon and the Israeli Tabor Winery) and Tempo Beverages of Netanya ( Pepsi Cola, Perrier, Chivas Regal, Heineken as well as the Israeli Goldstar and Barkan-Segal.)

Thus, Carmel which spent most of its history as a wine growers cooperative, known as Agudat Hacormim in Hebrew, will now become a public company. 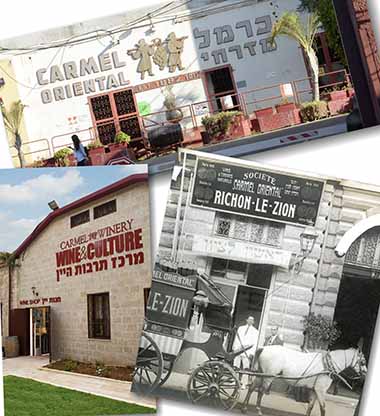