THE RISE OF ARGAMAN

It seems as if 2022 is ‘The Year of Argaman!’ In the first 6 months of the year there have been some very impressive successes.

Jezreel Argaman 2017 scored 96 points and was awarded a gold medal at the highly regarded Decanter World Wine Awards in London. It was Israel’s leading wine in the whole competition….and many of Israel’s leading wineries were competing. Jezreel Valley Winery is a small winery, specializing in particular on Israel’s adopted variety, Carignan, and Israel’s own variety, Argaman. The Argaman is sourced from an old vine vineyard in Givat Nili, in the northern Coastal Plain. Yehuda Nahar is the winemaker.

Barkan Beta Argaman 2019 scored 95 points and received a gold medal at the same Decanter WWA. It was the second wine in the tasting, above all other Israeli wines bar one. Barkan is Israel’s largest winery and their winemaker Ido Lewinsohn MW is a great believer in Argaman. Beta is their label for the on premise restaurant market in Israel. Their Argaman comes from the Judean Foothills.

In fact, out of the top five Israeli wines in the 2022  Decanter competition, no less than three were made from Argaman! These include the ones made by  Jezreel Valley and Barkan. The other was made by 1848 Winery.

Finally, Jezreel Valley Argaman has been listed in a number of French Michelin Star restaurants in the last few months. This is partly because of excellent work by their French importer, but also because Israeli Argaman is seen as something unique and different. 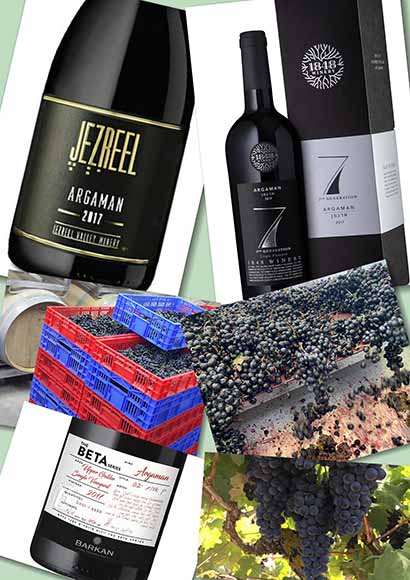 Argaman is a cross between Carignan, Israel’s adopted variety and Souzao, from the Minho, in north eastern Portugal. The name means deep purple or crimson in Hebrew. It was developed in 1970s. The first Argaman was produced by Carmel in the 1990s. The father of quality Argaman was Avi Feldstein, then of Segal Wines, now of Feldstein Winery.

Many people new to Israeli wine groan when they are confronted with yet another Cab, Merlot or Syrah. They eagerly follow the progress of indigenous Holy Land varieties like Bittuni, Dabouki, Marawi and Jandali. However, these are only made in miniscule quantities and though the wines create great curiosity, they are far world beating quality. To say the least. However, Argaman is an Israeli variety, grown nowhere else in the world apart from in Israel. If the wines are scoring 95 and 96 points, and receiving Gold Medals in competitions of the caliber of Decanter WWA and Challenge International du Vin, then maybe Argaman is the answer for those looking for an authentic and unique Israeli variety.