Argaman is the 6th most planted red grape variety in Israel. Originally the purpose of this variety was modest. It was not intended to be seen so much, but to be used more as a work horse grape. Recently though, Argaman has been catapulted to the forefront by the very good results in the Decanter World Wine Awards and the Challenge International du Vin. So maybe we should look at this variety with new eyes.

The story began with Carignan, which was bought to Israel by the Mikveh-Israel Agricultural School in the 1870s. This was even before Baron Edmond de Rothschild planted French varieties all over, and it has remained here ever since. It was at its peak in the 1970s, when more than 50% of the grapes grown in Israel were Carignan. However, even today, it still remains the second most planted variety after Cabernet Sauvignon.

In the days when quantity was the only objective, the Carignan was over-cropped and it did not provide wines of concentration and color. Indeed, it was used for cheap blends, Kiddush wine and grape juice. The powers that be, wanted to bring a blending grape that would provide more color. So in the 1970s, the Israel Wine Institute, led by Charles Loinger, a Frenchman from Strasbourg, decided to introduce Petite Sirah for that purpose. (It was brought to Israel along with Colombard and Emerald Riesling. Emerald Riesling was to become the largest selling wine and Colombard, the most planted white variety.)

At the same time and for the same reason, Professor Roy Spiegal, of the Volcani Institute, was working on his own creation. The Volcani is the agricultural research arm of the Ministry of Agriculture. Spiegal came up with a cross between Carignan, with the Portuguese variety Souzao, which comes from the Minho region, of northeast Portugal. It is also sometimes used in the blend of Port. On a visit to Vinho Verde country, I managed to find a Souzao varietal wine. It was very deep colored, very sharp with a slightly coarse taste. One could understand why it is chiefly used in blends. Professor Spiegal named the new variety ‘Argaman’, which appears in the Bible. It translates to ‘purple’ or ‘crimson.’ His hope was that it would eventually replace Carignan. (Spiegel’s other, lesser known cross, was between Muscat de Frontignan (Canelli) and Dabouki. This variety was named after him, and called ‘Roy’.)

Argaman was planted in the Zichron Ya’acov, Judean Plain and Judean Foothills regions, but was mainly used as a silent blender. The legendary wine critic Daniel Rogov was asked about the benefits of the variety, and he answered: “Three things: Color, color and color!” The first varietal that was actually named ‘Argaman’ was produced by Carmel Winery under their Emek (Valley), entry level label. The first international medal received was for the Carmel Valley Argaman 1996, which won a silver medal at the Beverage Tasting Institute in Chicago.

However, Carignan, far from disappearing, went through a quality revival. In the early 2000s, winemaker Assaf Paz led a revolution, particularly at Carmel and Vitkin wineries. This was for identifying the potential of existing Carignan and Petite Sirah vineyards, previously used for grape juice or cheap blends. By lowering yields and starting with the express objective of making quality wines, the ugly ducklings were turned into swans. Carmel and Vitkin started producing some truly fine Old Vine Carignans and Old Vine Petite Sirahs. Later Recanati Winery took up the baton too.

The father figure of quality Argaman was Avi Feldstein of Segal Wines. He saw the humble Argaman in a new way. So, he decided to give it a chance by treating as a fine wine with unfulfilled potential. Firstly, he planted the variety at the high elevation Dovev in the Upper Galilee and gave it the care and attention of a quality wine. Creatively, he fermented his Argaman on the skins of Merlot grapes, to provide more tannin, aroma and flavor. The Segal Rechasim Argaman 2006 was the result. It was the first quality Argaman wine. Third party recognition followed. The 2008 Segal Argaman won a Gold Medal at the Challenge International du Vin in Bordeaux! Israeli wine folk sat up and took notice for the first time.

In 2012, a start-up winery was established called Jezreel Valley Winery. It was founded by Jacob Ner-David and Yehuda Nahar, and the winemaking consultant was the respected Californian, Ari Erle. They decided to focus on what I call ‘Israel’s adopted variety’, Carignan, and Israel’s very own variety, Argaman. By focusing on more unfashionable varieties, they thought they would have a better USP (unique selling point) and be loyal to their vision of producing ‘more Israeli’ wines. The winery successfully carved its own place in an overcrowded market and achieved high scores particularly for their prestige ‘Icon’ and Carignan. Futhermore they became regarded at the ‘Argaman specialists.’ Towards the end of last year, their Jezreel Argaman 2019 took a giant leap forward, when scoring a first ever 93 points in the important website: jamessuckling.com.

However in 2022, the variety really came of age. It may become known Chinese New Year style,  as ‘The Year of Argaman.’ Firstly, the 1848 Winery won a Gold Medal for their 7th generation Single Vineyard Argaman 2017 at the very prestigious Challenge International du Vin in Bordeaux, emulating Avi Feldstein’s success so long before. The 1848 Winery Argaman is grown at Ramat Sirin in the Galilee, where the soil is basalt stone and volcanic, similar to the Golan Heights. 1848 Winery was founded by Yossi Shor in 2006. He is the 8th generation of the Shor family, which founded Israel’s oldest existing winery in the Old City of Jerusalem in 1848. The winemaker is French born, Bordeaux trained Ilan Assouline and their consultant agronomist is none other than Dr. Pinny Sarig, regarded as one of Israel’s most experienced and leading viticulturists.

Secondly, the Jezreel Argaman succeeded to be listed in a succession of Michelin Star restaurants in France. This was partly due to good work by the importer, Eden Wine & Spirit, and, no doubt, the quality of the wine, but it was also because Argaman represented something unique and authentic, that could not be duplicated in any other wine producing country. Jezreel Valley Winery has two Argaman vineyards, both in the northern Coastal Plain. The main one is Givat Nili, which is old vine, nearly 50 years old. Here Argaman is grown in bush vines. The other is near Zichron Ya’acov.

However, the most striking recognition of Argaman came in the Decanter World Wine Awards 2022. This is the largest and arguably the highest quality competition in the world. Numerous Israeli wineries, large and small, sent in their wines for evaluation. Three of the five leading, highest scoring Israeli wines in this year’s competition were made from Argaman! These were the Jezreel Argaman 2017, Barkan Beta Argaman 2019 and the 1848 Winery Single Vineyard, 7th Generation Argaman 2018, (the next vintage after the Bordeaux Gold Medal winning wine.) 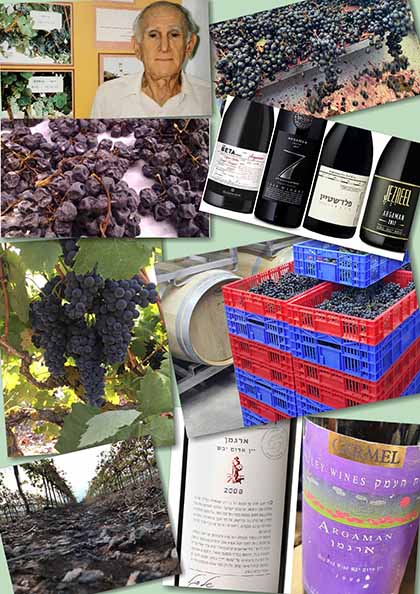 The star was the Jezreel Argaman 2017 which won a Gold Medal and scored 96 points. This was the highest score of any Israeli wine. Kudos to Jezreel Valley….and Argaman! The tasting notes read: “Deeply colored, near black, inky wine full of sweet, ripe black fruits, red fruits and cassis. This wine has a silky texture, ripe, fine grained tannins…..the long finish gives plenty of time to reflect on this little known Israeli grape.”

The best buy of the competition, (my description, not Decanter’s,) was the Barkan Beta Argaman 2019, which also won a Gold Medal and scored 95 points. Only two Israeli wines won Golds, and they were both varietals of Argaman! Barkan Winery is Israel’s largest winery, which is owned by Tempo Beverages. Beta is their label for ‘on-premise’ restaurants, and their wines are mainly found on Tel Aviv and Jerusalem wine lists. Confusingly and inexplicably, they sell their Argaman under different labels and brands in different countries. It is Barkan Beta in Israel, Barkan Classic in the United States and Segal Levant in the United Kingdom. This is scarcely the best way to build brand awareness! Whatever the label, their Argaman, comes from the Judean Foothills, near where the altitude rises sharply into the Judean Hills, on the way to Jerusalem. The winemaker is Ido Lewinsohn MW, one of our most inventive and creative winemakers, who believes in Argaman. He is also a pioneer of the local, ancient native Holy Land varieties, like Marawi, Dabouki, Jandali and the newly discovered Be’er varietal, sold only to one restaurant in Tel Aviv.

As for Avi Feldstein, he now has his own Feldstein Winery, situated in the Dalton Industrial Estate. As such one of the pioneers of the Upper Galilee in the nineties, has returned to the Upper Galilee. He last produced an Argaman in the 2015 vintage and but has now has released a 2019. It is produced from an Upper Galilee vineyard. Again he is inventive, to squeeze the maximum from this variety. Half the fruit is sun-dried, appassimento style, to extract more flavor, while the rest is fermented whole cluster, to maximize the fruit character. Feldstein believes it his duty as an Israeli winemaker, to produce the most Israeli wine possible. Hence, his obssession with Argaman, and Dabouki, which is the most Israeli of the Holy Land, native varieties.

What are the characteristics of Argaman? To me the variety has a hearty color, the aromas are of cherries and raspberries, tannins are soft and the wines have a peppery character. Most notable may be the very refreshing acidity.

Here is a 100% Israeli variety winning awards and gaining international recognition, that any Cabernet would be pleased to receive! So for those of you who are tired of drinking yet another Cab, Merlot or Syrah from Israel, and who are also frustrated that varieties like Dabouki and Marawi are made in such miniscule quantities, help is at hand! Wake up and smell the Argaman!

The writer is a wine industry insider turned wine writer, who has advanced Israeli wines for 35 years. He is referred to as the English voice of Israeli wine. www.adammontefiore.com