Jacques Capsouto z”l, famed restaurateur in New York, and pioneering winemaker in Israel, has passed away at the age of 77.

Born in Egypt, he spent time as a child in Lyon, where he picked up his interest in food, and then moved to America.

He opened his restaurant ‘Capsouto Freres’ in Manhattan with his brothers, which for thirty years was an institution.

In the early 2000s he was the first well-known non-kosher restaurant to make a feature of selling Israeli wines by the glass. As such he became an ambassador for Israeli wines.

During Hurricane Sandy his restaurant was flooded and had to be closed after thirty years. 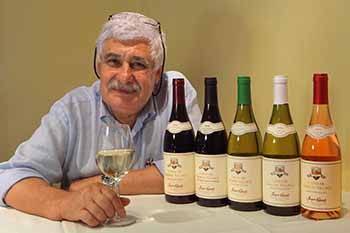 At the age of nearly 70, he then began a new career as a winemaker in Israel. He scouted out the land, and found a beautiful 100 dunam, high elevation, sloped vineyard

near Pek’in in the Upper Galilee. He planted Mediterranean varieties, only made blends, and refused to use new oak barrels. He made Southern Rhone style blends and Provence style rose.

This was his message of what Israeli wine should be like. Each wine was named after his parents and brothers and the labels illustrated what a Francophile he was.

He endeared himself to Israelis by coming to exhibitions and trade shows, pouring his wines and explaining them in his thick French accented English.

He was a great character, much loved and garnered great respect in food & wine circles.

May his memory be a blessing.