We have just lost a friend and great supporter of Israeli wine. Professor Amos Hadas has 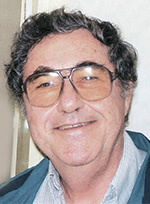 passed away. He was an academic researcher, practical scientist and teacher with great accomplishments to his name.  His profession and speciality was in soil, water and irrigation technology. He contributed greatly to the country in these areas. However when he retired in 2000, he devoted himself more and more to what was basically a hobby. Here, he combined his intellect, curiosity and passion with his love for wine. His main interest and expertise was both in exploring ways of ancient production of wine, promoting wine culture and simply enjoying the fruit of the vine with enthusiasm. He had an academic and educational approach, was totally independent, and was motivated by the subject he loved and cared about deeply.

I first knew of him when Michael (Mimi) Ben-Joseph wrote the book “The Bible of Israeli Wines”, which was published in 2002. The wine lover and El Al pilot, Ben-Joseph, visited Hadas to receive soil maps to help with the explanation of the wine regions in his book. The knowledge and expertise of one, complemented the other, and a firm friendship was formed. Hadas contributed his knowledge to the book, (and I contributed my English), and in the end he was invited to write the foreword. In Ben-Joseph’s words he found “a scholar, a connoisseur and true wine lover, who with dedication was always ready to lend a helping hand.”

Then he contributed to the Wine Route of Israel, where I was a co-author. On behalf of Eliezer Sacks, the publisher, he wrote sections on making wine and with winemaker, Arcadia Papikian, came up with the idea of writing a blessing for the grower and winemaker.

In the meantime, he would become a regular contributor of articles on current wine issues on internet sites and in wine magazines. His articles were always long, deep, scholastic and usually railed against some deficiency in local wine culture or the lack of an appellation system. He was a great believer in doing things correctly.

Of course, he was always the go-to expert on history. When Roni Saslove and Guy Haran wrote their recent book “Wine Journey – An Israeli Adventure”, published in 2021, it was of course Professor Hadas who was approached to contribute to the section on history.

Professor Amos Hadas was always courteous, correct to a fault. He saw things uncluttered by conflicts of interest. He was totally independent and every time he talked about wine, he always had a twinkle in his eye and a bouncy optimism. He would ring me every Rosh Hashanah and Passover without fail, to wish me a Shana Tova or Chag Sameach. We would talk about health, he would ask after my children and tell about the subject of his latest article or research. I will miss his call this year.

When the archaeological excavations of the Byzantine wine complex at Yavne were announced to great fanfare, it was said with absolute confidence, that annual production was 2 million liters and most of the production was white wine. I had my doubts about these statements and wanted to get a professional diagnosis. So who did I ring? Amos Hadas of course. He put me right and as usual, gave me far more information than I asked for.

His main legacy to us wine folk is his tour de force book “Vine And Wine In The Archaeology of Ancient Israel.” It is a magnificent, fascinating book, published by Kronenberg Publishing Co. in 2007. To my eternal regret, it is only published in Hebrew. However, the best compliment I can give, is that whenever I compile a list of wine books on Israel in English, I always include this too, because the illustrations are so good.

In 2015 Professor Amos Hadas was awarded with The Wine Lifetime Achievement Award by the Terravino Wine & Spirits Competition. He came late to wine, but we were the beneficiaries of his wisdom, endless curiosity and boundless enthusiasm.

His memory is a blessing.