Chef Shalom Kadosh is an icon. He has cooked for Kings and Queens, Presidents and Prime Ministers, from President Carter and Menahem Begin onwards. Nowadays Israeli Chefs are shaking up the world, but Kadosh was the first. No one has done more to advance Kosher cuisine, Israeli gastronomy and he has been a shining ambassador of Israel amongst his peers, the greatest chefs in the world, and gourmets and gourmands everywhere.

On March 21st 2021, his world nearly came to an end, when on the day of his daughter’s wedding, he was robbed at a petrol station, and everyone could see on CCT TV, the sickening blow his head received on the concrete. His recovery was described by his doctors as a miracle. As soon as he was able to leave hospital, the Chef of the President of France, Guillaume Gomez, flew over to present Kadosh with a medal celebrating his life’s work, in a surprise ceremony. I saw it on the news with great relief and joy. Recently I contacted him and invited myself to come and see him.  Our paths have crossed a few times during my time in Israel.

In 1989 I made Aliyah and as a wine guy, looked for work in the wine industry. Unfortunately everyone was interested, but you know how it is here, no-one responded with a yes or no. I did though have a background as wine manager for a hotel group, and eventually I was offered a job by the late Clement Hassid, the gentleman General Manager of the Sheraton Plaza Jerusalem as Food & Beverage Manager. He explained to me the job would include working with a chef who was a legend. It was the first time I heard of Chef Kadosh.

As fate had it, the same week I was offered the job, I met Dan Propper, the owner of Osem. He took one look at my cv, and said: “you should be working in the wine trade.” There and then, he telephoned Avraham Ben-Moshe the CEO of Carmel Mizrahi, and hey presto, I was offered a job. I chose wine over hotels, and the rest is history. I spent the next 27 years working with Carmel, the historic winery of Israel, and the Golan Heights Winery, the pioneering winery of Israel.

I used to visit Chef Kadosh in the bowels of the Sheraton Plaza, to talk wine. His office was more modest than I expected. Though I was slightly apprehensive bothering the great man, he was always kind, unhurried and welcoming.  At that time his ‘Cow On The Roof’ was the finest Kosher restaurant on the planet, bar none.

We next met over what was arguably the most famous meal ever held in Israel. It was the King David Feast, held in 1996, to celebrate 3,000 years of Jerusalem. The organizers decided it would be a twelve course banquet (to symbolize the Twelve Tribes of Israel) and that Chefs would be invited from abroad to prepare each course. A few months before the event, nothing was moving and the dream event seemed far removed from reality. They then approached Chef Shalom Kadosh, late but in time, who took ownership for the event. He had to attract the most famous chefs in the world, explain the Kosher restrictions, cope with fragile egos and orchestrate a twelve-course meal fit for the G-ds.

Shalom Kadosh here performed a miracle. He managed to cajole, attract and invite twelve of the world’s most famous chefs at short notice, to come and cook. He did it by first persuading the great, late Joel Robuchon, possibly the greatest of them all, to support the venture. Once he had accepted, others followed. He then had to prepare a menu that flowed through twelve courses, with specific recipes to suit the strengths and wishes of these superstars.

There were a few fraught nerves over Kashrut, which was new to most of these superstar chefs. The great Chef, Jean Louis Paladin, was not best pleased when the officiating Rabbi threw his carefully grilled foie gras into the bin, whilst Three Star Michelin Chef, Gualtiero Marchesi, was furious when he was not permitted to use gold leaf in his signature Risotto dish.

The wines were selected by Serena Sutcliffe MW, head of the Sotheby’s Wine Department and Philippe Bourguignon, Sommelier of the Laurent Restaurant in Paris. From memory they were Carmel Private Collection Sauvignon Blanc, Yarden Chardonnay, Yarden Merlot, Yarden Cabernet Sauvignon and Carmel Private Collection White Muscat. The choice is indicative of where Israeli wine was in the mid-nineties! Bourguignon was later quoted as saying the best wines were the Yarden Chardonnay 1994 and the Yarden Cabernet Sauvignon 1992. By the way, Serena Sutcliffe was the wine expert that ‘discovered’ Domaine du Castel, but that is another story.

Anyway representing the Golan Heights Winery, I was one of those privileged to attend the banquet. Three hundred people paid $600 a head, with the proceeds going to charity. The chefs prepared 3,600 courses!  I will never forget: I was sitting on a table with a young couple of supposed feinschmeckers. The wife was very vocal about how wonderful the food was, but I could not help noticing that she was playing with the food with her fork and not eating anything. She then quietly passed it to her husband who ate hers as well as his own, enjoying twenty four courses for his investment.

After this event I looked at Shalom Kadosh with new eyes. Who else an earth could have pulled this off? And the answer is no-one. These chefs came for him. It was a personal commitment.

In 1998 he did it again. The Golan Heights Winery decided to organize the first, totally original Golan Culinary & Wine Festival. The idea was initiated by the late Laurent Celcer and organized by the peerless Daniel Benaim. The first decision they made was to coopt Chef Shalom Kadosh. It was the obvious decision. Again Kadosh attracted the very top level of chefs. Three Star Michelin Chefs of the caliber of Marc Haeberlin, Michel Lorrain, Philippe Legendre came, along with celebrity chefs Jean-Louis Palladin, and Hubert Keller. The wine VIP guests were Adam Strum, owner & editor of the Wine Enthusiast, Professor Roger Boulton from UC Davis, Marc Beyer, owner of Leon Beyer of Alsace, Brian Jordan, a wine writer from England and, again, Philippe Bourguinon, Sommelier of Laurent Restaurant in Paris.

The grounds of the Golan Heights Winery were transformed. Large tents were constructed with air conditioners. The main hall had a kitchen were the chefs gave cooking demonstrations and workshops, which were relayed on larger screens to an audience watching in tiered seating, theatre style. Wine tastings and lectures by the wine guests also took place. Though it was booked up, many people were desperately clamoring for tickets. It was a food and wine festival of a standard and scale never seen before in Israel.

In 2001, they did it again. Chefs included Igles Corelli, Marc Haeberlin again, Jacques Chibois, Christian Delouvrier and Anne Pic-Sinapian.  This is a wine article, so to give a scale of the place of wine in the events, the wines for the Gala Dinner were Yarden Blanc de Blancs as an aperitif, Yarden Katzrin Chardonnay, Yarden Merlot Magnum, Yarden Katzrin Magnum and Yarden HeightsWine with the desert. I stood with sommelier, again Philippe Bourguignon, as he gingerly removed the wax from the Yarden Katzrin 1990 (the first ever vintage of this icon wine). It was the first time any one of us had seen so many magnums of Yarden Katzrin in one place!

In 2010, Shalom Kadosh celebrated 35 years as Executive Chef at The Sheraton Plaza Hotel, which later was renamed Leonardo Plaza. Illustrious chefs worth 22 Michelin Stars between them gathered in Israel. They were joined by legendary French food critic, Giles Pudlowsky, who had named Kadosh “the Bocuse of Israel.” Paul Bocuse, the great chef, was famous not only for his cuisine, but also for his influence of generations. The comparison is totally with merit.  Amongst the great Chefs who came to pay homage included George Blanc, Michel Lorrain, Marc Haeberlin, Philippe Legendre, Jacques Chibois amongst others. They cooked alongside the crème de la crème of Israeli chefs like Haim Cohen, Yonatan Roshfeld, Meir Adoni and Ezra Kedem, who initiated the event. Tickets cost NIS 1,800 with the proceeds going to Beit Issie Shapiro in Raanana. 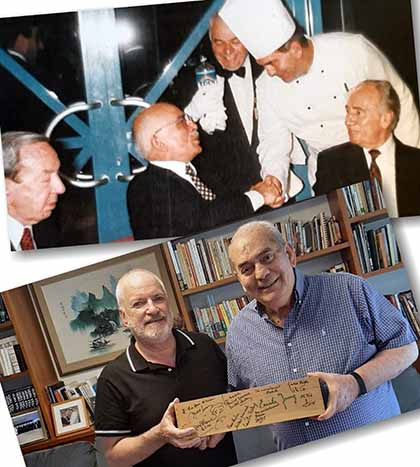 In honor of the great chef, I took the responsibility to be the sommelier for the evening and Carmel Winery and Yatir Winery supported the event. This time I did not eat, but wandered around the room checking the wine service was the best it could be. We served the following wines: Pommery Champagne, Yatir Sauvignon Blanc, Carmel Limited Edition, Yatir Forest, Carmel Shaal Gewurztraminer Late Harvest, Carmel Vintage (Port style) and Carmel 100 Brandy!  What an evening that was! At the end I presented him with a magnum of Carmel Limited Edition signed by winemaker Lior Lacser. I arranged for all the guest chefs to sign the presentation wooden box.

When I visited him in his home it was reminisce about these unique events. These were the ones I was involved in, but of course Kadosh stage managed countless similar events in his sparkling career. I was extremely moved to see the gift box was on prominent display.

Shalom Kadosh was born near Marrakesh in Morocco, in a family of nine children. They came to Israel when he was 14 years old and settled in Afula. He began his cooking career on the cruise ships, and from there he came a long way to be the person who single handedly reinvented Kosher gastronomy and drew attention to Israel cuisine at the highest possible level.

Now he is a different battle, that of rehabilitation. It will be long and hard going, but it is fortuitous that he has Zohara, his wife, in his corner.  She is a pearl, firstly with the patience and love with which she has helped his recovery, but also with the unwavering support with which she has supported his whole career. She is also a wonderful baker. Whilst we talked I was gorging on homemade biscuits and cake, hot from the oven. She did not know that like Oscar Wilde, I can resist anything, except temptation.

I liked Kadosh’s answer when asked what was his favorite dish: “Any time the plate comes back clean.” Reminds me of what I say. What is a good wine? Simple “An empty bottle.” Kadosh gives a great deal of respect to the Golan Heights Winery. The same revolution that happened with bread and cheese, also happened with wine. It was the Golan Heights Winery who were responsible for kicking wine up a notch or three in Israel. His favorite wine is the Yarden Katzrin.

I was quite relieved he remains the same Shalom Kadosh. Warm, modest to a fault, with a smile that could melt icebergs. He is a great story teller, recounting the professional events that shaped his life, but tells it all with an innocence and wonder, that he still can’t quite believe it all happened. A mensch in Chef’s whites. Thank you for all you have done for Israel, Chef!

The writer is a wine industry insider turned wine writer, who has advanced Israeli wines for 35 years. He is referred to as the English voice of Israeli wine. www.adammontefiore.com